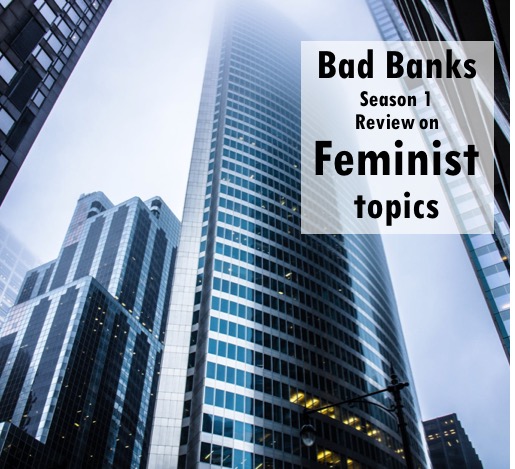 Big Banks – a german series, which is airing season 1 on Netflix (and season 2 on Germany’s program ZDF) is telling a story of the investment banking world. I personally have studied Economics and Finance was one of the courses but I have honestly not much of an idea what banking means exactly. In the last two weeks I have binged two seasons of Big Banks and I want to share my two cents with you. Spoiler Alert: everything following this paragraph will be spoiling what’s happening in the series.

Season 1: The first season of Big Banks hooked me right away. We have a female main character called Jana Liekam who is smart, pretty, and a hard-worker. She gets fired out of nowhere, so she runs up to the Director of the Bank – and another female lead-character Christelle LeBlanc. It is clear from there on, that this girl will fight for her right and fight to get what she deserves. We find out later that Jana has her flaws: her panic attacks. The first one is in the first episode, which gets the viewer compassionate about the character. Overall it seems like she haven’t had it easy in life. Her mum has died and there’s no sign of a father figure in her life. She gets fired in episode one and while she seems desperate after receiving the news it becomes clear that she is a fighter.

I am not going more into detail about the rest of the season but I want to point out the three topics that are depicting female issues in a certain way:

While the three examples above are the most obvious ones for feminism being one of the underlying topics of the series, I think the entire two seasons so far are showing very classic gender roles. I will get more into detail about that when reviewing the second season.

Overall the first season has definitely hooked me. Every episode is about 50-55min. long and one season has six episodes. I binged the first season within one week. It is definitely an interesting topic and the matter is well enough explained so one who has no clue about investment banking (like me) can still follow the overall storyline. If you pay well attention you will figure out how much attention to detail there is in some scenes.

What I probably love most about the series is the picture. I love how the tone is set in the darker scenes to be warm and cosy, while scenes during the day appear colder – thanks to the blue-ish undertone. It definitely sets the mood right and it also fits somehow perfectly with the storyline. The picture is always on point on my opinion. A good watch until we wait for spring.

Please let me know which scenes you have spotted that relate to feministic topics. Have you seen the series so far? How did you like it? Leave a comment and have a beautiful Sunday evening.